I mean the 1980's era films, not the remake with Gary Oldman.  Wikipedia has a plot synopsis but simply put, Robocop is "Part Man, Part Machine, All Cop".  He is created by a conglomerate called OCP and has three "Prime Directives"
1. Serve the public trust
2. Uphold the law
3. Protect the innocent
[There's a fourth but that's not relevant to this...]
So, these directives govern the behaviour of Robocop and he must obey them.
Now, cast that to the mission statements, publicly stated or otherwise, of Investment Banks such as "First class business done in a first class way",  "Long term greedy" etc.
In the sequel, Robocop 2, the hero is captured by an evil drug distribution gang, dismembered and his remains dumped outside a police station.  Robocop is re-constructed but is loaded up with hundred of directives, which he must obey.
"300 new directives, severely impeding his ability to perform his duties" --Wikipedia
I had some conversations over recent weeks with a number of Investment Bankers and a common theme from every conversation has been that the number of directives faced by anyone in an IB has reached epidemic proportions.  Any new business has to be vetted, judged, cleared, reported and approved by endless rounds of working groups, committees and compliance officers.
In the film, Robocop realises that the 300+ directives are destroying his ability to perform his job.  He therefore plugs himself into an electrical sub-station and short-circuits his memory.  The directives are lost and he's back to his usual self, taking on the bad guys and winning.
Can IBs perform the same change, or will the 300+ directives they face mean that their days as innovative centres of risk taking are gone? If not banks, then who? 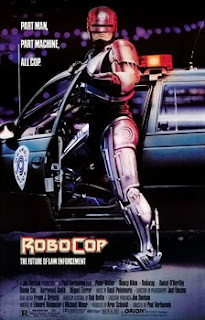