on March 23, 2015
In previous posts we have covered the joys of Excel VBA.  Although I am a big fan and have written many tens of thousands of lines of VBA over the years, the language is in the doldrums - the cool kids using MEAN, Scala, OCaml, Haskell or something equally cutting-edge would never want to use VBA.


One of the criticisms made of VBA is that it's not possible to use quality tooling and source code control such as subversion or git.

This is a common perception but it's also wrong. 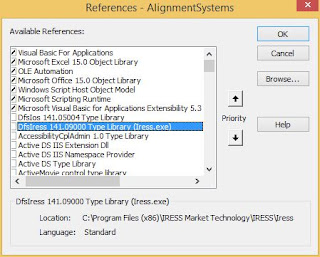 On the development machine I am using (Win64 with Excel 64bit) the library to reference is Microsoft Visual Basic for Applications Extensibility 5.3 (hereafter VBE).  This library opens up a world of possibilities for the developer, many of which are non-obvious and are of great value...