on March 27, 2015
Here we look at integrating Excel VBA with Git.  I will assume that the reader is familiar with Excel.  A great book on Git is downloadable from here.  I won't go into details on Git - it's covered in the pdf link.
So, one key deliverable for Excel Industrialisation is the use of source code control.  There is a slight challenge in the sense that this would normally be done using a user interface such as github rather than from within the VBA development environment.  Happily there is a simple way to integrate Git with VBA. 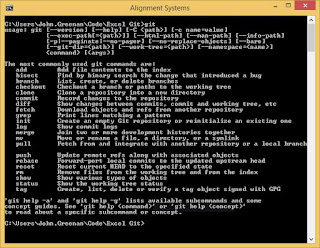 On github you can find the code to reproduce this. To reproduce: