What is a FIX engine? [Updated]

on February 13, 2015
In a number of consulting roles over the years I've been asked this question. It's something that I still get asked so I'll describe my view. First, some history on the firms in the FIX engine market sector, then some narrative.
[Updated 13th February 2015]
[Updated 21st April 2016]

The main point to bear in mind is that the FIX engine market is a mature one, there are very few pure-play fix engine vendors on the market any more.  M&A activity has been consistently taking independent firms into the hands of larger firms or private equity ownership.
FIX engines that have been acquired
TransactTools
Founded by Sam Johnson and a New York based team of ex-Goldman Sachs technologists. Sold to NYSE Group on the 8th January 2007.  I have looked at NYSE 10-K returns and although I can see that Wombat cost US$200m plus a US$25m retention pool for staff there’s no mention of the price for TransactTools.  Short of asking Sam I will make a guess that it’s materially less than US$200 million.
Javelin Technologies
Appia and Coppelia. Sold to NYFIX on 31st March 2002 for (according to 10K) US$10m in cash, US$41.2million in common stock and US$3.5million to buy out employee options. Subsequently sold to Ullink in 2014.
CameronTec
Founded by John Cameron, an Australian former UBS technologist. Sold to Orc Software in a deal closing in 2006 for US$30.8million.
B2Bits
Acquired by EPAM on April 3rd 2008.  Again, cannot find a price tag attached.
Ullink
Acquired by HgCapital on 3rd March 2014.  Again, no price tag attached.
SolutionForge
A FIX engine written in C# with some buy-side focus that was acquired by SimCorp in 2005
Standalone FIX engines
FIXFlyer
Founded by George Kledaras, a serial FIX engine creator. Still operating in their own name.
RapidAddition
Founded by Kevin Houstoun.  Still operating in their own name.
NEW! Standalone FIX engines that are new to the industry
Coral Blocks CoralFIX
Java, New York via Brazil
FIX8 FIX8Pro
C++, Australia
IEISS FIX engine
From Finland, interestingly this is written in Erlang
Chronicle
NEW! FIX within FPGA
MBOChip Silicon Feeder
Embedded FIX engines
Fidessa
Due to the underlying architecture of the Fidessa platform (tag value paired datastreams in proprietary OpenAccess format) it's quite easy to extend to a FIX engine paradigm.  My understanding is that the first Fidessa FIX engine was built by implementation consultants before being "grandfathered" into the main application stack.
Sungard
No indepth knowledge
Bloomberg
No indepth knowledge
Sivron FIX engine
No indepth knowledge

Standalone FIX engines packaged up into other vendor applications
ITG
Appia (own source information)
Thinkfolio
QuickFIX (own source information)
Portware
Appia
Charles River Development
CameronFIX
Eze Castle
Appia
Digitec D3 rates engine
CameronFIX
Fidessa LatentZero
CameronFIX
FIX engines packaged up into FIX networks
ThomsonReuters Autex
ttConnect (own source information). Since this is now owned by Ullink I wonder how long this deal can remain in place?
Fidessa Express
Fidessa
NEW! FIX engines that seem to have fallen off the radar...
Pravegatech VegaFIX engine
Speedwell Associates FIX engine [I believe a number of the team are now with RapidAddition]
Cognosys FIX Hardware Solutions
Octatec FIX Gateway
EZX Inc iServer
APT Computer Systems (Bobsguide mention here)
SAP/Sybase/Financial Fusion (Waterstechnology mention here)
[If you have any information about other products please get in touch and I'll update this blog post]
So, moving on to the core of this post, what exactly is a FIX engine?
Think of an operating system and then compare Windows 3.11 with Windows 7.   There’s a lot of functionality in Win7 that did not appear in Win3.11.  Part of this is due to advances in technology and part is due to changes in expectations from the user community as to what should be contained within an operating system.  When reviewing FIX engine functionality it’s wise to use a similar viewpoint – I suggest that a core/satellite model is appropriate.  Core functionality is that which is needed for a FIX engine to bear that name, satellite is functionality that enhances this core – the nice to haves and extensions.
Core
Optional
We can see that there is not really a huge amount of actual code involved in the implementation of the core functionality.  Indeed, preparing a FIX engine as a proof-of-concept is no more than a few works work for a reasonable developer.  Writing an industrial scale, reliable FIX engine is a harder task.  But, the market has been clear in assessing this matter and ascribing a low value to the core and higher value to the optional components.  Which is exactly what we have seen in the operating system market, which brings this full circle.
And here's another type of engine: 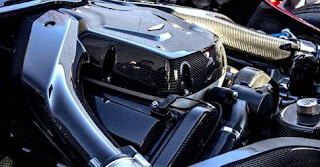